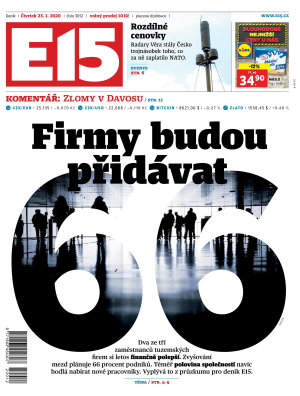 Transaction Creates Premier Global IT Distributor with the Most Diverse End-to-End Solutions from the Data Center to the Living Room.
E15 weekly

Miroslav Kalousek: The gov’t’s failing on the job

Six companies have joined the tender process to select two official taxi firms for Prague’s Václav Havel Airport. Among these are existing operator Fix. The second of the current leaseholders of a priority pickup area outside the airport’s terminals, AAA Radiotaxi, will not be partaking in the tender due to a series of unresolved issues. However, Prague Airport representative Jiří Petržilka says the firm’s list of objections is unwarranted.
E15 weekly

Jan Mládek: Russia not yet a burning problem, but things will worsen

The Czech trade and industry minister discusses the Ukraine crisis and sanctions – which he sees as simply another point on a dangerous scale of potential escalation.
E15 weekly

ANO party leader Andrej Babiš recently opined to journalists that talk of conflicts of interest between him running a business empire and his role as future finance minister ignored one key fact: The greatest damages will be to me, he argued.
Kurzovní lístek EUROplatby zdarma
Kalkulačka